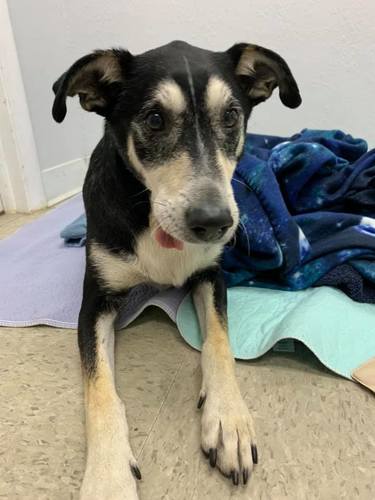 Buddy was playing a permanent — and painful — game of fetch.

Buddy, an 8 year-old mixed breed, was getting a teeth-cleaning last week at Friends of Strays when Dr. Emerson observed something odd: A stick was lodged between two of the pup’s teeth. He had a stick, about 3 inches long, wedged across the roof of his mouth, stuck between a tooth on each side. It had likely been there for years and had eaten into the roof of his mouth, causing two of his teeth to rot. Our veterinary team was able to remove the stick and finally relieve Buddy of the pain it had been causing him. He had to have both teeth extracted and has an open wound in the roof of his mouth, but he’s expected to make a full recovery in just a few short weeks. 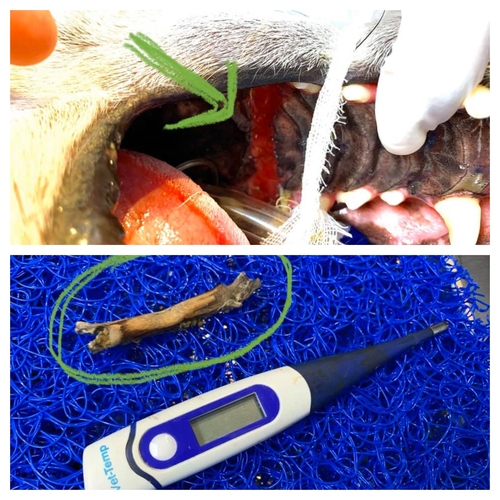 “It completely embedded its way into the roof of his mouth, sort of creating a bridge,” says Dr. Emerson. Living with the twig for nearly half his life seriously damaged two of Buddy’s pearly whites. “It caused both of his teeth to rot on either side — so our we had to extract both of them.”

Friends of Strays purchased a dental machine with the donations we received on Giving Tuesday, 2018. In just a few months, we’ve been able to treat dozens of homeless animals with severe dental disease who otherwise wouldn’t have gotten the care they needed.

“We wanted a dog that was maybe already trained and lived through that whole puppy stage,” says Buddy’s new mom, Misti Tate. “My son, he’s 15. He’s been begging for a dog for several years.” Tate finalized the adoption Thursday evening, the same day as Buddy’s dental cleaning. Despite his hard life and recent dental surgery, Tate says Buddy is “very calm; I’ve only heard him bark one time and we’ve had him about two and a half weeks. He’ll see other animals and he won’t go running towards them when I take him for a walk, he just kind of looks at them. He’s just really sweet.” She said her family is over the moon about their new fur baby.