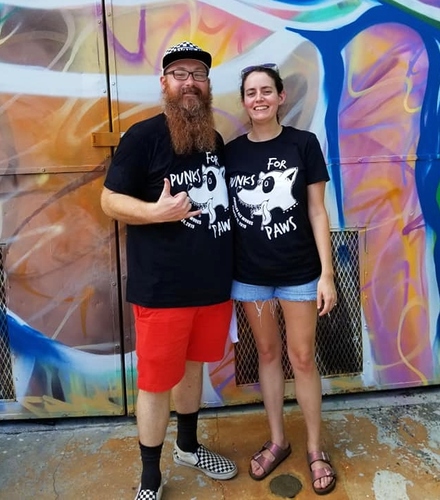 Back in 2011 Matt Shelley was living in Auburn, Alabama. Matt was involved with a shelter in a nearby, rural community and along with the help of some friends, came up with the idea of a music festival-type event to raise money for the group. He was friends with a few members of bluegrass bands, and although it wasn’t necessarily his “type” of music, it was easy for him to fill a day with local bands, thus “Strummin’ for Strays” was born. Fast forward 8 years, post Matt’s move to the Bay Area, he wanted to replicate the success of “Strummin’ for Strays” for a local shelter, only this time with his preferred genre: punk rock.

Matt’s gotten to know a lot of great musicians in the St. Pete punk community through his own band, Johnny and the Minutes. Many of these guys are animal lovers and rescue supporters so getting them on board was an easy task. And according to Matt, Friends of Strays’ status as a no-kill shelter, along with his existing relationship with CEO Dara Eckart, made us an easy choice of beneficiary. So after weeks of logistical legwork, Matt organized the first annual “Punks for Paws”! On August 24, ten local punk bands gathered at Pinellas Ale Works for a day-long music festival. Matt wasn’t exactly sure what to expect the day of the event. He knew the bands all had a great following but he underestimated the level of enthusiasm from both the public and the musicians. In the end, Matt beat his goal of $2,000 and raised a grand total of $2,600 for Friends of Strays! It was too much fun to be a one-and-done kind of thing, so after a well-deserved break, Matt will be back organizing a second event in no time! In addition to Matt Shelley’s hard work, we’d like to thank all the bands who participated as well at the Friends of Strays volunteers and everyone who attended for making Punks for Paws a huge success! We can’t wait for round 2!